My grandpa was a mechanic for Catapiler machinery. He was one of the finest and hardest working men I have ever known. Ever since I was little I was fascinated by his tool box, especially the wrenches. He had a wrench for everything. Little wrenches, big wrenchs, socket wrenches, cresenct wrenches, allen wrenchs, and open-end wrenches. My favorite was a 1 1/2 inch open-end wrench that weights more than two pounds. 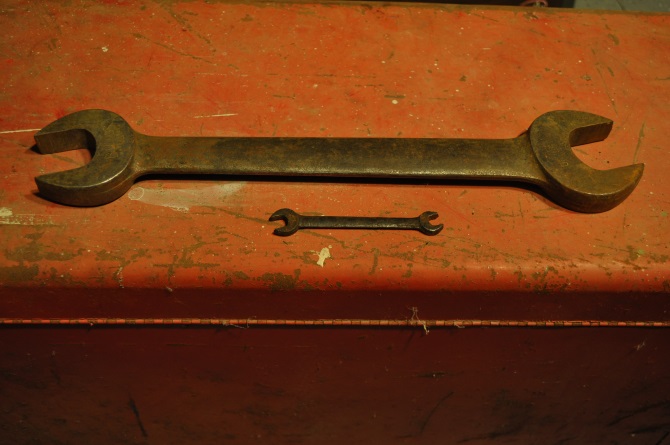 Grandpa didn’t collect wrenchs because he liked something about the wrenchs, he collected them because they helped him solve real problems.

I am not a mechanic and have no need for a 2 inch open-end wrench. But my job is to solve real problems. I am a software engineer and my tools are things like programming languages, compilers, static analyzers, and white boards.

It’s not enough to continue to use the same old tools. You have to learn, adding new tools to the tool box.

I don’t just use tools, I build tools. Fred Brooks once described a programmer as a toolsmith. He said “That swordsmith is successful whose clients die of old age.” The software I build is only successful if it is a useful tool for my users.

So that is why this blog is named Right Size Wrench. It reflects both the timeless craftsmanship of a job well done as well as the everchanging world of software development. Using the right tools to create the right tools.